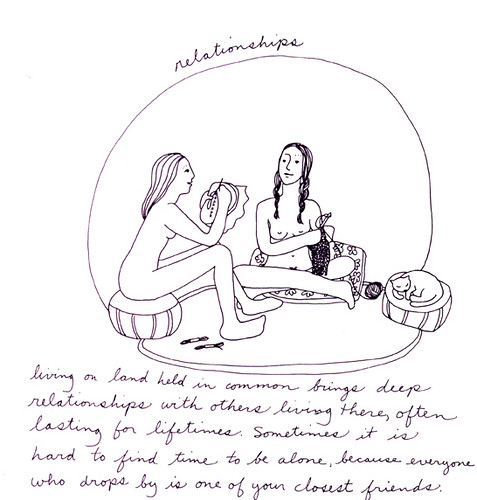 I wrote this essay at the request of curator Neil Kramer, with whom I co-founded the (now defunct) online Hippie Museum. I still find it posted on various sites around the Internet – evidently it struck a chord with other people who lived in those times.

What Did The Hippies Want?

We wanted intimacy– not a neighborhood where you didn’t know anyone on the block, or you competed, kept up with the Joneses.

A hunter-gatherer or early agricultural community meant that people lived, worked and sought deeper contact with the holy spirit as a group, and they all knew one another, from cradle to grave.

We wanted a culture which acknowledged the human body, not just for sex, but to hug each other, to be naked without shame, to revere the body with natural foods, beneficial exercise, herbs, baths, massage, deep understanding. This was not part of the culture from which we came. We wanted a culture that thrived on gift-giving. We hitchhiked, shared our food and drugs, gave away our possessions. People who could afford to buy land invited others who could not to live there.

We opened free stores, free clinics, free kitchens, not just in the Haight, but everywhere we went. We wanted be living proof that God(dess) was taking care of us and therefore there was no need to hoard.

We wanted to live without the constraints of time. We wanted to wake up each day and decide what would be the most fun to do that day-–or just find out as it went along. We wanted to go with the flow, follow our bliss, be here now.
This was in complete opposition to the culture from which we came.

We valued spiritual depth, which we referred to as “heavy.” We admired one another for being happy. We admired those who offered selfless service or peaceful resolution of conflict. We wanted a spirituality that actually caused you to grow as a person, not one in which people attended religious gatherings for social status. We wanted to be guided by our own Inner Spirits, rather than by priests.

We thirsted for the spiritual awareness and grace we experienced on psychedelics, without psychedelics, or in addition to them. Many hippies would spend their last cent on a weekend workshop that promised to “change your life forever.” That was how so many gurus found followers in those days.

We wanted to live in harmony with the earth, the plants and animals, the indigenous peoples of the earth, with each other, with ourselves. We were the fuel behind the rapid expansion of the environmental movement. We experimented with living arrangements that we thought would harmonize with nature. We sought out indigenous tribal elders as our teachers.

We wanted to make the things we wore and used with our hands, grow our food and medicine, feel all kinds of weather – all the experiences our modern urban lives had excluded in the name of convenience and comfort. We wanted to live on the road, have adventures, build things that hadn’t been built before, and live in them.

We wanted to live our mythic selves, give ourselves names that resonated with our souls, dress in costumes that expressed our dreams, do daring deeds, dance as if no one was looking, decorate our homes with magical things, listen to music that took us out of ordinary reality into altered states of awareness.

We wanted to see life without violence. We wanted media that contained truth. Some of us risked our lives to find out what the government was doing and let the underground press know. We wanted to talk about things in print that we were not allowed to discuss in our culture of origin.

We wanted to live without stupid, arbitrary rules, either for ourselves or for our children. Some of our children, as adults today, say they wish we had been more protective of them, or offered more structure. We only knew what we endured, being as culturally different from our culture of origin as Chinese are from Italians, and punished for it, and wished to spare our children these experiences. However, some portion of kids raised by hippie parents grew up to be hippies themselves. At that point, one can say, a new culture was born and continues.